Black hair with a white streak

Khoi Dao
Laura Stahl (Young)
Yuriychka "Yuliy" Jirov (ユーリィゲロフ, Yūri Gerofu), with his full name being Yuliy Jirov (ユーリィ・ジロフ, Yūryi Jirofu), is the main protagonist of Sirius the Jaeger. He is half werewolf, with exceptional physical ability. He has sworn to take revenge on vampires who destroyed his homeland and became “Jaeger” ever since. As he is used to solitude, his aura makes him unapproachable. However, he also shows his softer side in rare occasions. His weapon is Three-section staff. He fights using combat technique which has adapted to fit this multi shape changing weapon.

Yuliy is a tall built teenage boy with deep blue eyes and long, messy black hair that he keeps tied back in a low ponytail. He has a white streak near the left side of his hair. Yuliy is a Sirius. When his beast blood activates, his eyes and his veins glow a bright blue.

He is strong minded and holds a strong sense of hope and belief in those he comes across.

He was born in a village named Dogville. After the attack of the vampires and death of his family, he survived and swore to avenge their deaths by killing all vampires in his way.

Sachi is the mother of Yuliy. In Yuliy's past, Yuliy has shown to love his mother and wouldn't leave her. A scarf that she was making Yuliy at the time of her death was destroyed by the rogue vampire chasing Yuilily during his village's destruction. Sachi is also a human, making Yuliy half-human.

Alexei is the father of Mikhail and Yuliy, as well as the husband of Sachi. He left Dogsville when Yuliy was very young to seal away the Ark of Sirius. Yuliy also mentions that he does not remember his father's face since he left when Yuliy was so young.

Ryouko had been shown to have developed an infatuation over Yuliy through the course of the series, perhaps falling for him the first time she saw him, and commits varied acts of rebellion in order to help him. Yuliy could show signs of recognizing her feelings, but he does not know or simply feigns ignorance.

While recovering from his wounds at Doctor Hanada´s house, Yuliy befreinds Saki Hanada, the doctor´s young daughter. Yuliy shows the softer side of himself towards Saki, as seen when he offers to read to her until she falls asleep, gaining the affectionate title of Big Brother. Yuliy also shows sympathy towards her as both their mothers are dead. He becomes unusually talkative around her which Philip makes fun of him for. After Saki’s father dies, Yuliy becomes upset and angry at himself, having left Saki alone in the world.

Yuliy and Bishop become partners out of the same goal to acquire the Ark. Bishop is one of the few characters he relied on in combat, the other being Mikhail. Yuliy showed a lot of trust in Bishop's ability to handle himself during their fight against Klarwein. Despite Bishop's attempt of betrayal after revealing his vampire side, Yuliy tells him that he trusted him because his eyes and words held truth, despite knowing all along that he had been a vampire. The two renew their partnership and continue on to fight the vampires awaiting outside.

Yuliy appears to be concerned while fighting alongside them as the group itself appears to have become his family. Unwilling to get them hurt when he decided to pursue the Ark, he left them and sought out others to aid him.

Werewolf Physiology: Born a werewolf, Yuily inherited much of the physiology of a werewolf, but the fact of his half-human heritage has diminished the extent of his inheritance.

Superhuman Smell: Another quality of being born a werewolf, Yuily has a superhuman sense of smell, as it is mentioned throughout the series, he can smell the blood on the vampires.

Superhuman Strength: Yuliy has shown superhuman strength, being able to land from high altitude without any signs of pain and being able to break Kershner‘s sword with ease.

Superhuman Agility: Yuliy has shown to have a superhuman agility, being able to dodge Kershner's sword attacks and Agatha's kicks.

Superhuman Endurance: Yuliy has shown to have a superhuman endurance, showing no signs of exhaustion after a fight and catching up to a moving train despite him trailing behind quite a distance.

Pain Tolerance: Yuliy has shown to possess great pain tolerance, after fighting, even if he got stabbed and cut by Kershner, his recovery is phenomenally quick which is mentioned late on in the series by one of the other Jaegers.

Beast Blood: When Yuliy feels immense rage, his veins become blue and his eyes glow unnaturally, upgrading Yuliy's physical abilities but also making him uncontrollable. being unable to stop himself from hurting someone other than his target. If more rage is felt, the streak in Yuliy’s hair spreads to his bangs and the end of his ponytail. 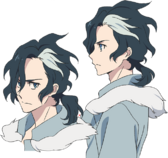 Mikhail and Yuliy as kids

Yuliy with his dying brother