Sirius the Jaeger Wiki
Register
Don't have an account?
Sign In
Advertisement
in: Characters, Male, Vampire,
and 2 more

Tsuda Kenjirou
Yevgraf is a character in Sirius the Jaeger.

He was driven to find the Ark of Sirius and use it to "make new vampires", but the Ark ended up consuming him. He tried to attack Tamara - another Royal Vampire - but failed to because Yuliy came in time.

Vampire transformation - Yevgraf has shown to have the ability to change other peoples to vampires by transforming Mikhail into a vampire.

Human magnetisation - Yevgraf has shown an unknown power that allows him to attract vampires with his pupils. 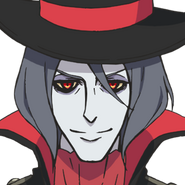