Ray Chase
Willard (ウィラード, Wirado) is a supporting character in Sirius the Jaeger. He is a “Jaeger” but also known for his role as part-time adviser at V Shipping's historic preservation department. He is the leader of Yuliy’s team and carries out orders from V Shipping Company in many countries.

He has grayish hair and a monocle over one eye.

He may seem cold but he has a very warm heart.

Keen intellect: In the past time, Willard has shown to be able to understand and decrypt Sirius's writing.

Gun Skills: Willard possesses the ability to use a gun with average skills. 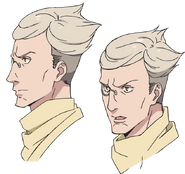