She is the only daughter of the family whom Willard’s team stay with while they are in Japan. She tries to thrive in literacy and combat and practices kendo relentlessly. She is brimming with curiosity and fascinated in Willard’s team. However, she is especially interested in Yuliy but she has different feelings for him.

Ryouko is a petite girl with brown hair that is styled in twin braids, where it is looped back and tied with navy colored ribbons with bangs swept to the left side and brown eyes.

Ryouko is a very curious yet stubborn and impulsive girl who doesn't take no for an answer with a care-free and high spirited attitude. She can be very rebellious, mainly towards her father, and is willing to disobey his orders to satisfy her own selfish goals by relentlessly following Yuliy around wherever he goes, even if it means putting herself in serious danger for it.

Though reckless, careless, clueless, Ryouko is brave and fearless when facing danger despite the fact that the danger itself alone consist of vampires. She is very passionate about her kendo lessons and is quite skillful with her katana.

At the end of the series, Ryouka has put aside her childish streak along with her selfish ways and became mature after helping Yuliy and the Jaegers preventing Yevgraf from committing genocide.

Ryouko is first introduced as she practices kendo with her teacher. She notices V Shipping and becomes especially interested in Yuliy. She follows him to the garden where she observes him in secret. She is forced to come out when he notices her and tries to discuss flowers with him. He replies to her questions coldly, saying that her flowers are rotting.

Ryouko becomes interested in Yuliy at first sight. However, it is implied that she holds feelings for him, but she denies it in embarrassment whenever Dorothea teases her about it.

Katana: Ryouko has a katana that she takes everywhere and she has shown that she mastered it enough to kill a slave.

"Do you like this place? There are a lot of imported flowers growing here and even the fertilizer has been procured from overseas. It's Father's prized garden." ― Episode 01 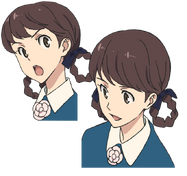